Over 45 captains fishing the area. 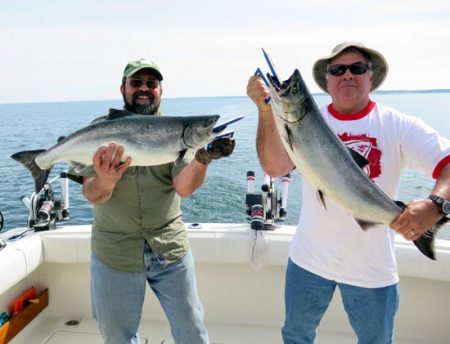 First was a high wire diver out 130 with a Mag Dreamweaver Blue Dolphin. Next was a low wire diver out 70 with an 8″ Kevin’s Girlfriend/Liquid Sunshine Action Fly. Third was a 225 copper with a glow spoon. We boated 2 out of 3. Then it was slow going. We talked to a couple other boats and they were hitting fish but it was dead for us. We headed out deeper and took a couple more. Our biggest King came on an 8″ Seneca Special Spin Doctor/Pickled Sunshine Action Fly out 100 on a low wire diver. We hit another double on a 175 copper with a Super Slim UV Black Dot Starburst & a 300 copper with a Mag DW Blue Hulk. We took a small King on an 8″ Chrome Mountain Dew Spin Doctor/Pickled Sunshine Action Fly out 85 on a low wire diver. We lost a big King on a 225 copper and took a small one on a 200 copper with a Mixed Veggie Super Slim . We never had a bite on our riggers and it wasn’t from lack of trying. We changed a bunch of baits but the fish didn’t want anything  to do with them.